Some feathered friends showed up today to help me find some vibrance. 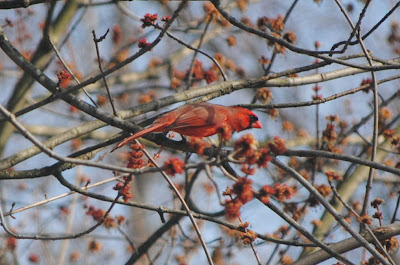 A cardinal in the red buds of the tree. 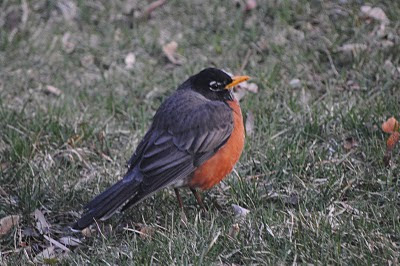 The fattest robin ever with his red breast. 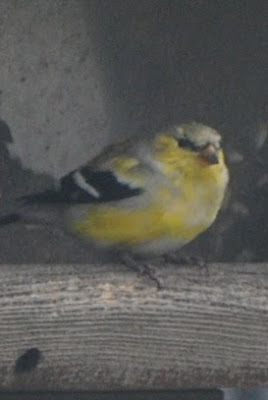 A gold finch at the bird feeder.

Time to head over to Beth's
Posted by Bacardi Mama at 9:46 PM 10 comments:

This is one of my new favorites. I had forgotten about it. It's at least ten years old. Our zumba instructor uses it as one of her cool downs.
Hope you enjoy it.
It has some great advice.
Posted by Bacardi Mama at 9:49 AM No comments:

Bari had this on her blog and it looked like fun. I totally stole it from her, but she said it was okay. Here you have...
The A B C's of Me

Age: 56
Bed size: Queen.
Chore you hate: cleaning toilets
Dogs: We've had three. A beagle named Buckwheat, a mixed terrier named Freddy and a golden retriever named Jack. No dogs right now though.
Essential start of your day: a shower
Favorite color: Green
Gold or silver: Gold
Height: 5’7″ on my driver's license, but I think I may be shrinking.
Instruments I play (or have played): I am the most non musical person you will ever meet. Does a kazoo count?
Job title: Preschool Assistant Teacher
Kids: I have four daughters. They are ages 36, twins 27 and 23.
Live: Northwest Indiana
Mom’s name: Louise
Nickname: Don't have one unless you like "nanny goat" which my cousin used to call me when we were kids a long time ago.
Overnight hospital stays: Three births and a D&C.
Pet peeve: I have too MANY pet peeves. One of my biggest is people who say one thing, but totally mean another.
Quote from a movie: "As hard as you think it is going to be, you wind up wishing it were that easy." about parenting from Terms of Endearment or "Sometimes, you just have to say what the fuck" from Risky Business.
Right or left handed: Right
Siblings: I have two older sisters an one younger brother.
Time you wake up: The alarm goes off around 5:45, but I'm usually up on my own between 5:15 or 5:30.
Underwear: What about it? I wear it!
Vegetable you dislike: I hate okra!!! It looks like someone blew their nose in your food.
What makes you run late: The internet. I spend too much time checking Twitter, Facebook, emails and blogs,
X-rays you have had done: The only ones I remember are of my teeth and when I was going to give birth to twins, they took one to see if they were both head down.
Yummy food you make: I get the most requests for my stuffed jalapenos and baked beans.
Zoo animal: I love the penguins!

I won't care if you want to steal this from me. Just leave me a link to yours in the comments.
Posted by Bacardi Mama at 8:13 PM 9 comments:

No doubt where I would go with youth.
Natalie goofing off as usual.
Aunt Katie taught her how to cross her eyes.
Nice going Aunt Kate!! 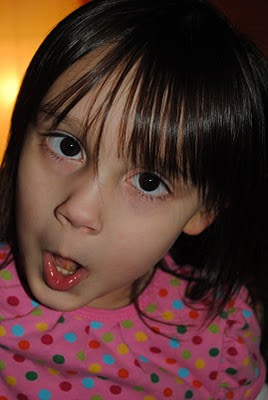 Lizzy as sweet as ever.
She's getting as goofy as her big sister. 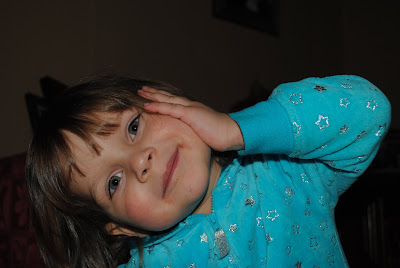 And last but certainly not least, the little man himself.
I'm having a real hard time accepting that Jack is going to be one year old already.
April 13th is the big day. He's already walking!
Where did that year go? 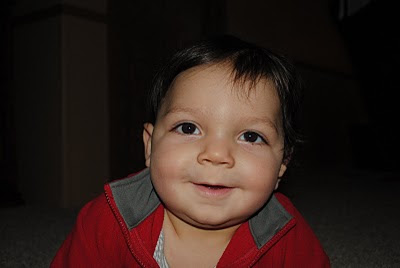 There was lots of youth captured over at Beth's.

This is her!
Lucy II 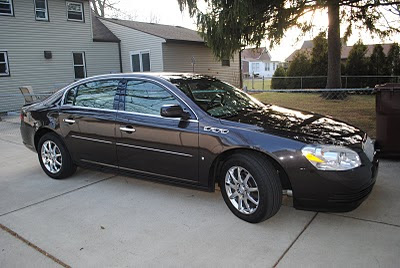 We picked up the new car. She's a Dark Mocha Metallic Buick Lucerne. She's not my beautiful red Lucy, but she's still very pretty and a really good car. She has some things that the old car didn't have, but she doesn't have a sun roof. I missed that yesterday when I came out of work and it was the first warmer day of the year. I got in the car all ready to open the sun roof and I remembered. I'm sure I'll get used to not having it though.
Dick is better every day. He's barely sore anymore and the bruises are pretty well gone too. The novelty of listening to him snore has worn off and I swear he snores more since we got the new bed. I think he is so stinkin comfortable, he is sleeping more deeply. Lucky me!
Tomorrow night is a 2 hour zumba party. It's going to be fun. I really love zumba. Next month is the March of Dimes Zumbathon. I'm really excited about that. We are working really hard to make it a great fundraiser for a cause very close to my heart. If you'd like to help us, just click on the widget in the sidebar and make a donation.
I guess that's about it for now. Hope you are all doing well. I'll try to be better about posting here. Life has just been so crazy and hectic lately. Hopefully, things will begin to calm down.
Posted by Bacardi Mama at 9:50 PM 3 comments:

I wrote over here today.
Stop by and visit.
Posted by Bacardi Mama at 3:35 PM No comments:

For the last four nights, I sat in bed and watched and listened as my husband snored. I was thankful to be able to do that. Before this past week, I had a different reaction to that very same snoring.

If you read my last post, you know that Dick had an accident on his way home from Florida last Sunday. The car was totalled, but luckily Dick was not. Amazingly enough, he walked away from the scene pretty much unhurt. He is sore and bruised, but that is all. And I am thankful.

I am also thankful that I am able to walk in the March of Dimes March for Babies in April. This is a cause that is very close to my heart. We lost a baby to miscarriage many years ago. I walk for Team James and Jake. Their mommy lost them at 20 weeks gestation. I also walk for another family who lost their son at 18 weeks gestation. I walk so that maybe someday, nobody will have feel the pain that we all felt and feel to this day.

If you would like to help me reach my fundraising goal of $1000. just click on the widget in the left sidebar. It will guide you through a donation page. No amount is too small or too large. Thank you so much for your support because what could be more important than healthy babies.
Posted by Bacardi Mama at 11:00 PM 4 comments:

The Call You Never Want To Get

The phone rang at 10:03 Sunday morning. I looked at the caller id and I knew that this wasn't going to be a good call. Dick was on his way home from his vacation to visit his dad in Florida and the call was from him. He never calls when he is driving. He always calls at the end of the day when he stops for the night. I knew it had to be that something happened at his dad's and he hadn't left yet or he had an accident or car trouble.
He had an accident. 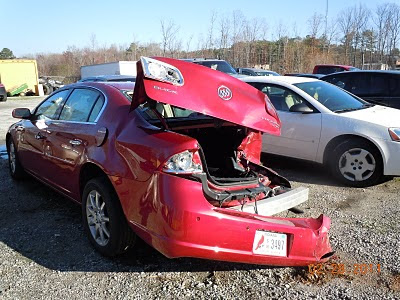 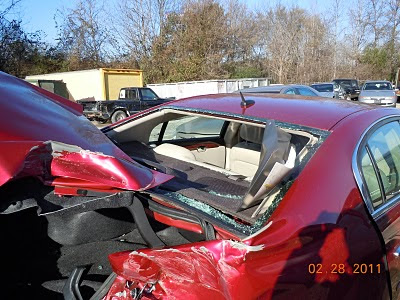 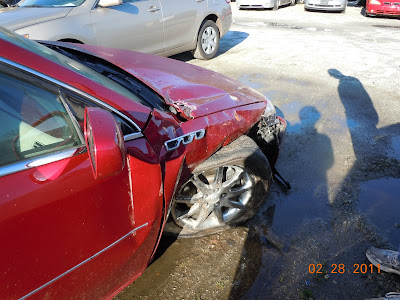 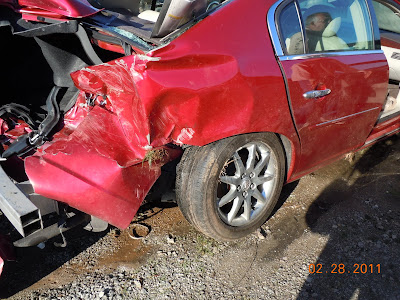 Looking at these pictures, it's hard to believe he walked away from this, but he did.
He had some personal guardian angels on his shoulders, I think.
I don't want to dwell on this. Dick is a little sore, but that's all. That was the best news ever. My brother-in-law and I drove down to the south side of Atlanta to a little town called Jackson, Georgia to pick him up. I can't tell you how wonderful it was to hug him and hold him and see for myself that he was really okay.
I want to tell you all that we have the absolute best brother-in-law in the whole wide world. He was a lifesaver and I never would have made it through the last three days without him.
You are the best Bernie!!
We got call on the way home from the insurance claims adjuster. The state police said that sole responsibility for the accident was placed on the other driver. That was good news. But for any of you who know Dick, the best news is that the golf clubs were unharmed!
Posted by Bacardi Mama at 12:19 AM 9 comments: